I've been terrible at writing here again. It seems I need external pressure to keep posting. So, I've recently started following Chuck Wendig at terribleminds and this week Chuck has issued a flash fiction writing challenge to respond to a photo from this buzzfeed article. I've chosen this picture: 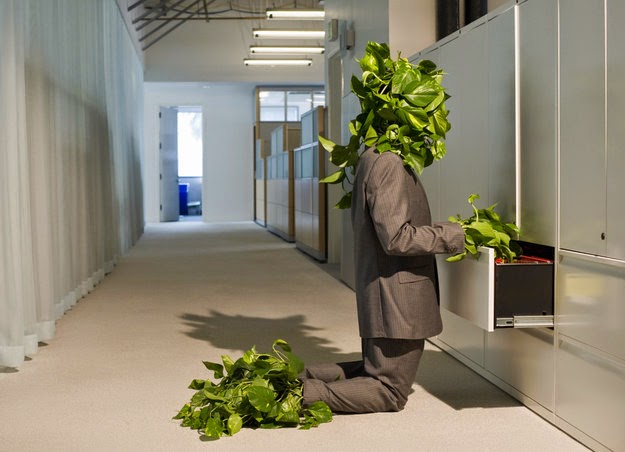 There wasn’t a lot of work for the green man these days. People had turned away from his leafy face. Christianity had much to do with it at first but in recent days, science hadn’t been much help either — with its climate change; GM crops; and salinity. What had once been worshipped had fallen solidly into the role of adversary.

At first, with his old job of demi-god now defunct, the green man just dropped out and went to ground. His leafy hands had no problem pulling fish from rivers or snatching up the occasional rabbit to stew up for dinner. His cabin was simple but comfortable enough — even for someone who was used to being exalted and brought offerings. The green man was a realist. Those days were gone.

From bad to worse — that’s how most things go. Not being recognised by the electoral roll or by the occasional people came across worked to the green man’s advantage for some time. But slowly the forest was pushed back by residential development and when the bulldozers came to a cabin in a small clearing, they checked their notes for building permits and, finding none for the ramshackle dwelling, pushed on.

Homeless and hungry, the green man walked the miserable streets. A wino in a park offered him a swig from his bottle as they shared a damp bench. The tatty man peered through the dusk at the green man.

“No room at the shelter,” he said, “We’ll go earlier tomorra, get a comfy bed for the night.”

At the shelter, the green man met Maude who showed them to stretchers and blankets. Maude smiled. Maude took an interest. The green man liked her immediately. His new tatty friend was more wary.

“I’d watch that one,” he warned, “She’ll have you into the system and back to the rat race before you know it. That shit’s not right.”

The green man wasn’t so sure. So when Maude talked to him about getting signed up for unemployment benefits, he did. When she suggested his first cheque go towards some new clothes and a haircut, he bought new clothes and walked into a barber’s. When Maude mentioned assisted housing, he put in a request. And when she had seen a job for an office assistant on the noticeboard, he wrote up an application.

“It’s nothing glamorous,” the woman in a pinstriped skirt and jacket warned during the interview, “Mostly filing, making sure the staff have copies of paperwork they need, maybe making coffees when a meeting is running. Does that sound like something you’d be interested in?”

Maude was so proud that she asked him to dinner so they could celebrate. In the evening light, she could almost forget his leafy beard and the rough bark of his hands. He was a man after all, a green man but still a man. His new suit and tie covered most of the leaves and his eyes fixed and held her so that the chlorophyll content of his person no longer troubled her.

He walked her to her door where he bent his green head to kiss her. He had waited patiently — like waiting for the seasons to change; for new offerings to be brought; for the prayers, chants and invitations of the turning wheel of the year. Maude had never asked about his past and he hadn’t offered. He thought he would like to tell her, someday, about who he had been, maybe one day soon. His hand was at her waist; her head tilted back looking up to him. When his lips were almost on hers, his leafy bearded cooled her cheek and she pulled away.

His work suffered when Maude failed to return his calls and he became further and further behind with the filing until the woman in the pinstripes said she would have to let him go — as if he had been straining to be free of them all along. He packed up his mug and the few personal things he kept in his desk drawer. On the way out, down the long hall with frosted glass that looked smokily into the offices that lined it, he picked up the hallway pot plant. The woman in pinstripes called to him,

“You can’t take that; it isn’t yours.” Without turning, the green man replied,

I found this on internet and it is really very nice.
An excellent blog.
Great work!