Confessions of an [almost] perpetual student.

I like studying. There, I said it—you can have me committed to the Nerd Central Asylum whenever you’re ready.

When I headed off from home at eighteen to start my undergraduate degree, I had no idea it was the beginning of such a long-term thing. It was 1991, the state of Victoria was in the throws of Premier Kennett’s school closures and I had decided on studying for a Bachelor of Education and becoming a teacher. Four years later I donned the cape and trencher to receive my degree from Deakin University which was unlikely to lead to employment given the condition of state education at the time. For the next whole school year I put in countless applications for teaching positions to no avail.

Degree number one was a bust. So, the following year I decided that if I was going to be effectively unemployed anyway, I might as well continue to study. I went back to Deakin and I enrolled in a Masters of Education by coursework.

I didn’t get very far with the Masters, because in my attempt to get myself out of the unemployment queue, I took a job as a governess in Outback Queensland. When I had the opportunity to resume the study, I looked at the course material and decided that although I really wanted to be a teacher, further study in Education was not what I was passionate about.

There was another false start when I decided to study for a Graduate Diploma in Women’s Studies via correspondence through La Trobe University. I did the reading and found the content all very interesting but I struggled with the lack of contact with other students. This was in the days before online study—when correspondence meant materials and assignment posted back and forth and really no contact with others in the course. I withdrew before I got very far into that one.

While teaching at Lilydale High School, I met a colleague who had completed a few levels of Auslan at VicDeaf in Melbourne. This re-inspired my interest in sign language. I did the available short courses at VicDeaf then went looking for further means to extend my skills. My hunt took me back to La Trobe and I began a Graduate Diploma of Deaf Studies. I actually finished this one and it qualified me as an Auslan language teacher.

Not long after that I was down at my local Swinburne University campus for something entirely unrelated and I picked up a brochure on their short courses—both online and face-to-face. I was teaching fulltime at that point but had managed to fit in the face-to-face study for the Auslan course and the associated travel one night a week. I noticed one of the online courses was “Pleasures of Poetry”. Being online meant I would be able to log on when it suited me, do the reading, do the tasks and post them to a message board—much easier to manage than driving to night classes. I had been writing poetry since I was a teenager, I decided it was about time to learn how to do it properly.

“Pleasures of Poetry” was my first online study experience. I found that it was able to create the perfect balance between contact with other students and the flexibility to fit the study around my other commitments.

From there I went back to the Auslan and began to work on a Masters of Education by thesis looking at Bilingual Deaf Education. I decided to do the distance education thing again and enrolled via an interstate university. I figured that the distance wouldn’t matter with this one as what I would ultimately end up doing was a much more independent project and writing up a thesis on my findings. All I needed was good contact with my supervisor.

I had a number of problems maintaining that vital contact. He rarely answered my emails and when he did, he would only respond to one or maybe two of the three or four (or five or six) questions I had asked. I felt like I was floundering, I didn’t know what I had to do and nobody would give me the answers I needed. This was all during the preparation stages of the actual project, so I bailed on that one too. (Are you keeping count? What’s my completed to uncompleted ratio at this point?)

It took me a while to realise that I missed learning stuff but then in a fit of disillusionment with teaching I started thinking about one of the other careers I had considered at the end of high school—journalism. So, back to Deakin University where they offered a Journalism course that could be completed off-campus via their online learning portal. Perfect. I enrolled.

Because I was still teaching, I decided I would do this study part-part-time. Normal part-time was two subjects a semester; I elected to do only one. A couple of years and about 5 units into the course I realised I wasn’t particularly interested in the journalism subjects and, in fact, the ones that caught my eye were the electives from the more general Graduate Diploma of Professional Writing. So, for once, instead of just withdrawing from a course, I switched to a different one that suited me better.

During my studies in Professional Writing, I found out about a Summer School in Creative Writing held each year to correspond with the Edinburgh Book Festival, so I went to Edinburgh. I could have had these units count towards my Graduate Diploma but I chose not to because there were other subjects I wanted to do through Deakin—I wasn’t ready to stop studying.

Of course, doing the Professional Writing course one unit at a time meant that it took me a really, really long time to finish it. Plus I intermitted in the middle of it so I could go and volunteer overseas for a year and a half. So, when I got to the end of the Graduate Diploma most people didn’t know that I was finished. I started looking at doing an honours year and I didn’t really tell anybody. In general, people assumed I was just “still studying” to finish the Graduate Diploma. When I say I didn’t tell anybody, I mean, my sisters knew but my mum and dad didn’t.

I’m not really sure why I felt the need to be secretive about taking on the Bachelor of Arts honours. Initially, I told myself that it was because I was doing it ‘for me’ and it had nothing to do with anybody else. But ultimately, I think my failure at trying to do the independent study of the Masters by thesis was in the back of my mind and was worried I wasn’t up to completing an independent project. I wouldn’t have to admit that I had tried and failed if nobody knew I was trying in the first place. 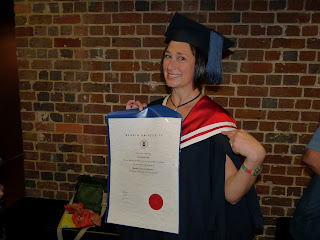 I didn't fail, as evidenced by the silly hat, gown & hood with stripes!

As my honours project, I undertook a study of country towns and post-colonialism through the production of a number of short stories. At the end of a very intensive year of study, I had completed a suite of short stories and an exegesis totaling about 20,000 words and achieved first class honours. My results permitted me entry into Deakin’s Higher Degrees by Research program—to do a PhD.

My PhD project is going to involve writing more short stories (lots more) but this time I’ll be researching the concept of women as keepers of culture through cooking, recipes and stories. Not only did I not tell people I was doing honours, I also haven’t been telling them that I’m going to do a PhD. I’ve started to, but some of the people closest to me still don’t know. I’ve told work colleagues because I had to explain why I was resigning. I’ve told my sisters because they’ve known all along. I’ve finally told my parents, although not having had much contact with academia, I’m not sure they realised the significance of studying for a PhD.

And now I’m telling you. There, I said it. You can call Nerd Central Asylum whenever you’re ready.
Posted by Deb at 7:50 PM

A dissertation, or thesis paper, is comprised of chapters, graphs, tables, headings, and subheadings. Above all, it is a research paper and contains wide array of facts collected from reference books, notes, etc. A research paper is highly customized and is expected to be error less. See more bachelor thesis

Live and learn! It's not too late to go to college to master an interesting profession, or to engage in self-education and to avoid classes, that very much to learn. So I chose mathematical courses and as a result, I came to the IT company in which I work at the moment. But other than that, I had to do written work, research and master's, but with such kind of writing I wasn't very lucky) My classmate is also not a very talented writer, he advised me a great option research paper help .And so I was able to solve my problems with written assignments and continue to study in depth the higher mathematics, geometry and other necessary subjects.